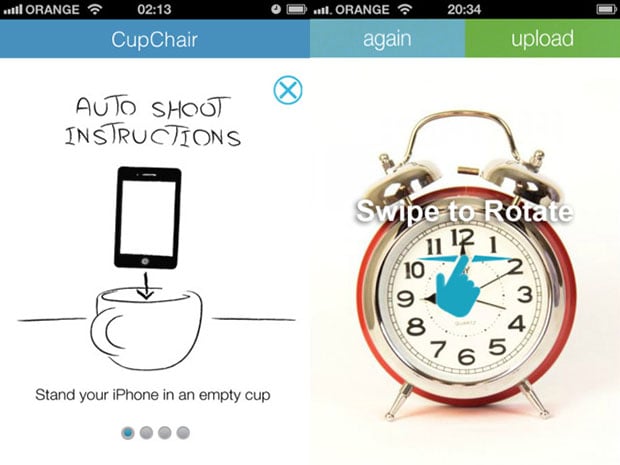 360° interactive photographs of products are a great way for online merchants to increase their conversion rates — people apparently feel more comfortable buying things if they can see what it looks like all the way around — but creating those views can be a pain. Enter RotaryView’s new CupChair, a simple app that greatly simplifies the process by taking care of most of the steps for you.

Instead of setting up a camera and rotating stand, snapping the photos, and using special software to create a 360-degree viewing experience, all you do with a CupChair-equipped phone is place it in a cup.
That’s right, a cup.
The makers want to simplify the process so much that they based the app’s name on the fact that you can use a cup as a simple tripod.
Once your phone is in the cup, you tap the “Start” button in the app. After the app snaps the first photo, you manually rotate your product a bit and then step back. Once there’s no movement in the frame, the app snaps another photo. You repeat this until you’ve shot at least 8 frames and have turned the object all the way around.
You then hit “Done”, and the app stitches the frames together into an interactive experience for you and provides you with some HTML code for easy embedding.
The app reminds us of the automatic panorama-making apps that also automatically snap photos for you, except instead of rotating your camera, you rotate the subject.
Here’s a video showing how it works:

RotaryView claims that the app helps increase online sales by 15% to 50%, and reduces the tedious process of creating this kind of immersive photo down to just minutes. Best of all, the app is free in the iTunes App Store (no word on whether it’s coming to other platforms).
If you don’t have an iPhone, the main RotaryView service does the same conversion with photos snapped using your ordinary digital camera.
CupChair in the iTunes App Store (via The Next Web)
© 2022 PetaPixel