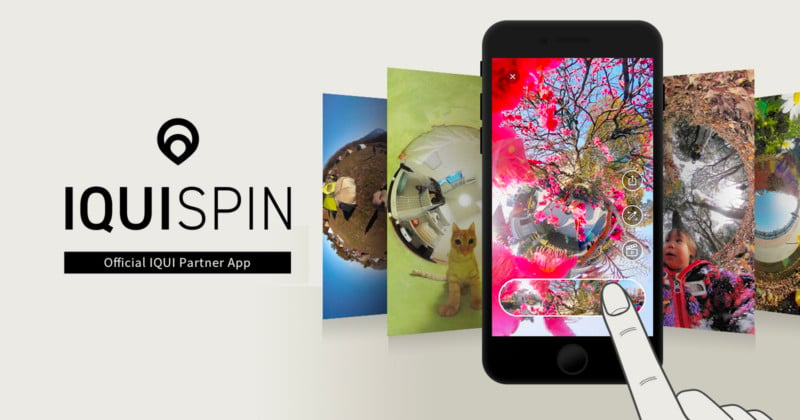 Vecnos, the company spun off from Ricoh that focuses specifically on 360-degree products and technology, today announced a new feature called SphereFlow that it hopes will allow users to rediscover and rekindle their love for their 360-degree images.
As a bit of background, Vecnos is the company spun out of Ricoh that makes the 360-degree camera device called IQUI. IQUISPIN is the app that controls that device, and it is in that app that you can find SphereFlow — it’s a lot of marketing terminology and similar-sounding names. Ricoh previously produced the Theta line of 360-cameras and still may continue to do so. However, it recently announced that the Theta Z1 would be discontinued.
Version 3.0.0 of the IQUISPIN introduces this new feature that Vecnos says is a “completely new way to browse 360-degree content.” It also updates other editing and sharing features to make working with photos easier.
SphereFlow allows you to browse all your 360-degree content with a swipeable bar at the bottom of your mobile device’s screen and allows you use it to scroll to see the full image in the photo. The result is a “flow” of sorts — hence the name — from photo to photo in your library. You can see how that works in the demonstration video below;

“SphereFlow heightens the 360-degree browsing experience and promises to inspire further content sharing,” Vecnos writes. “SphereFlow is currently patent-pending.”
The user interface has also been streamlined to show photos, videos, and projects files under an album tab, and you can now change the motions on the same screen where effects are selected. Vecnos also added four of what it is calling “IQUI-exclusive” effects: Cool Shimmer, Golden Stars, Glass Stars and Gossamer Butterfly.
Currently, there are 31 effects and 19 different motions, including three new IQUI-exclusive motions. While any 360-degree content can be edited with IQUISPIN, these new, exclusive effects can only be used with images and videos captured with an IQUI camera.

IQUISPIN was originally launched in August of 2020 and was designed to make editing 360-degree photos into mini videos with 3D effects fast and easy. Vecnos touts the app as requiring no prior 360-degree editing experience and that it provides several dynamic motion patterns and “realistic” 3D effects to allow users to make more use out of their 360-degree photos.
Vecnos says the IQUI is the smallest and lightest 360-degree camera on the market and originally launched in September of last year.
You can download IQUISPIN for free on Google Play and the Apple App Store.
© 2022 PetaPixel