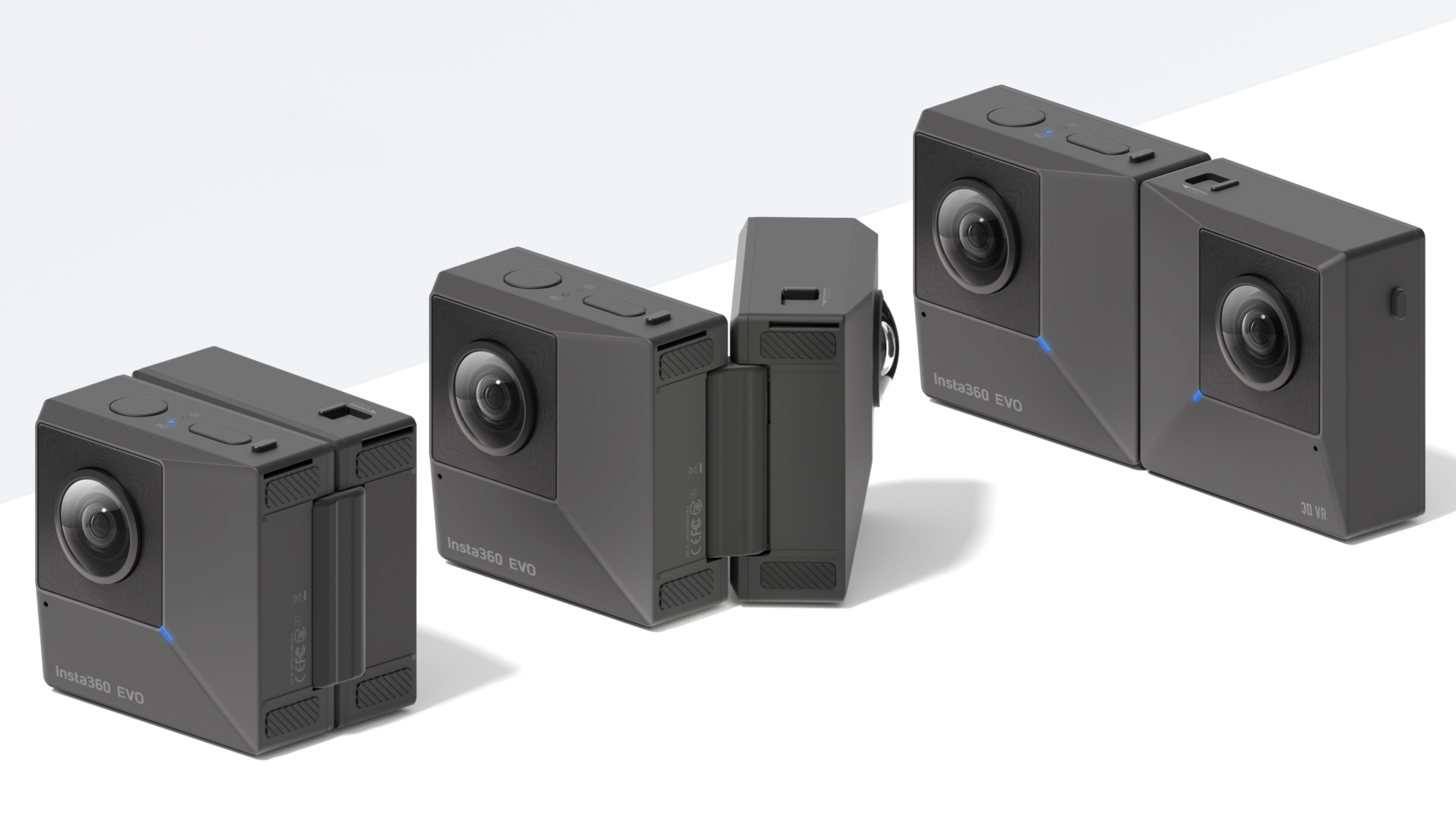 Teased last week, Insta360 has today launched the new Insta360 EVO, a 360° camera that also turns into a stereoscopic 3D 180° camera. Like the Insta360 ONE X, the Insta360 EVO shoots 5.7K 360° video, and 18-megapixel 360° still photos.
What’s very cool, though, is that the stereo 3D 180° view comes with the same FlowState stabilisation afforded to the Insta360 ONE X camera. From personal experience, I can say that on ONE X footage, you’d swear it was shot from a gimbal. If the EVO maintains this level of stability, it will be something of a breakthrough for small stereo 180° cameras.

So, let’s take a quick look at the specs…

Looking at the specs, it seems very similar to the Insta360 ONE X on paper, although I wouldn’t see this as an upgrade to or direct replacement for the ONE X. I think if you’re going to be using a 360° camera in more challenging environments where you might otherwise use an action camera, then the Insta360 ONE X is still almost certainly the way to go.

If you need a more casual take-anywhere 360° camera that you can also use to create immersive 3D content, then the Insta360 EVO could be the best option available today. At least for the price. I mean, look how happy this guy is!

One thing to note is that the Insta360 EVO doesn’t appear to have an LCD on it. Anywhere.

There’s nothing on the top or the sides to indicate much of anything, really. You’ve got what appears to be a couple of buttons, presumably to power the unit on and off, switch between photo & video modes and then either shoot a photo or start/stop recording video. On the side, we simply see the microSD card slot and micro USB (why no Type-C?) socket for charging.

Presumably, the lack of LCD means the control and operating is almost 100% from your phone screen, save for the couple of quick buttons on the top of the Insta360 EVO unit itself.
Along with the new camera, Insta360 has also released Insta360 VR, a new app for Oculus Go, HTC VIVE Focus and Samsung Gear VR which allows you to connect the EVO directly to a headset for streamlined wireless playback and transfer.
There’s also a new Insta360 HoloFrame, designed specifically for your phone’s display. It claims to allow you to watch 3D photos and video with the naked eye. “It’s simple, mind-blowing and feels like magic” their press release says. We plan to visit Insta360 on their stand at NAB next month, so we’ll put that claim to the test!
Immersive 3D video is something I’ve been following and interested in for a while now. I was very disappointed when YI told me that the YI VR180 wasn’t actually going to be coming to market as a retail product. It’s also why I was so excited about the Weeview SID camera just a few months ago, despite having some issues, and only shooting flat footage and photos, not 180° content that you can move your head around in.
The Insta360 EVO is available to pre-order now for $419.99 and we are told it will be shipping very soon. You can find out more on the Insta360 website.