Affinity Photo 1.10 is a free update for current Affinity Photo users but does the software also offer enough for Photoshop fans to make a switch? Let’s find out. 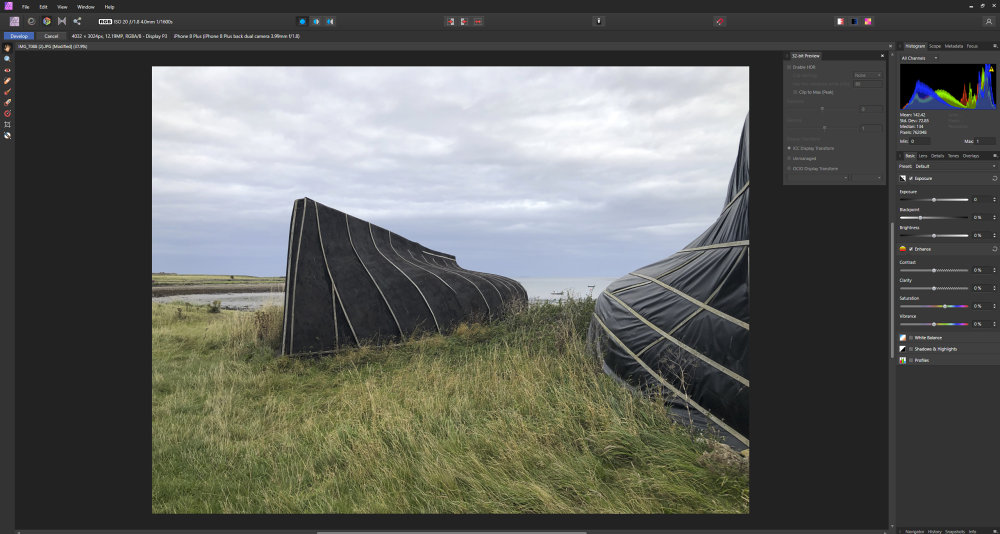 Affinity Photo has been billed as a Photoshop alternative for some time now and this statement is still true today. In fact, Serif has worked that hard to make Affinity Photo the go-to software for photographers, we can see amateurs stopping their Adobe subscription in exchange for this easy-to-use photo editing option. Plus, there's a free trial of Affinity Photo available so it's well worth giving it a go (we don't think you'll be disappointed).

Affinity Photo from Serif is an image editor that's been around for several years now but with ongoing improvements and a recent 1.10 update, we thought it was time to take another look at this popular photo editing software to find how the new features perform and to see if Serif has done enough to persuade more photographers, of all levels, to make the switch from Photoshop to Affinity Photo. 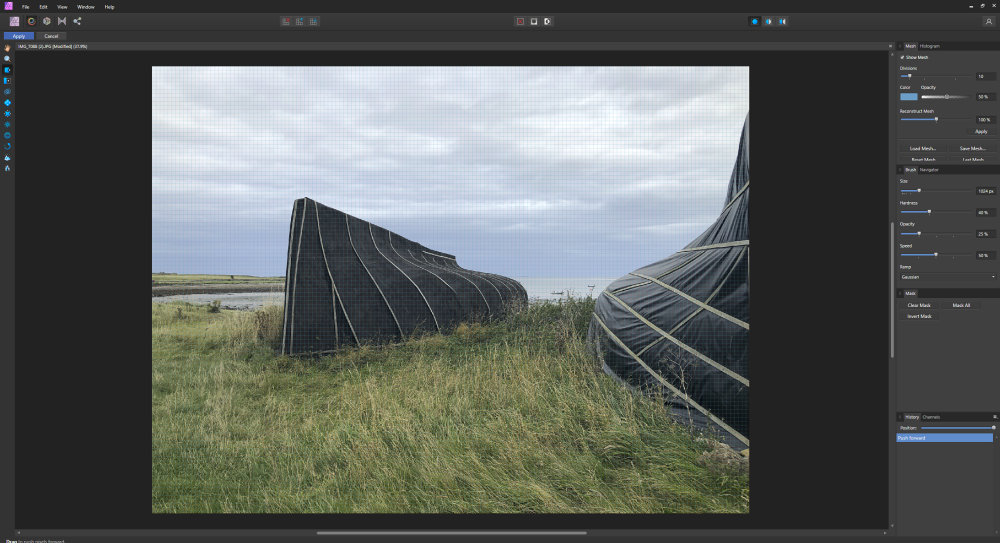 Affinity Photo, which is available for Windows (on test) as well as Mac and iPad, is software designed to be used by photographers to edit their photos. You can edit, manipulate and adjust photos and this includes RAW editing as well as creating panoramas, HDR photography, and astrophotography stacking. You also have access to all of the tools/functions you'd expect to find in photo editing software such as Layers, Layer Masks, Adjust Layers, and Filters. All edits are made non-destructively and filters/effects are applied live so you can instantly see how the changes affect your photo and make adjustments accordingly.
If you're new to Affinity Photo but already use Photoshop, you'll be familiar with a lot of the tools on offer, even many of the shortcuts are the same, but the price may surprise you as at £47.99, you do get a lot of impressive features for a reasonable amount of money.
What's New?
2021 has brought two updates to Affinity Photo with 1.9 introducing improvements to the RAW engine and a new mode to control the stacking of astrography images. There were a few tool adjustments such as the ability to make liquify adjustments as live, maskable layers and the Windows version was also brought into line with the GPU acceleration the macOS and iPad versions offer with up to 10x speed improvements on many pixel-based tasks.
With the 1.10 update, Affinity Photo has received several performance tweaks with better layer blending and improved editing speeds when creating complex layer stacks. 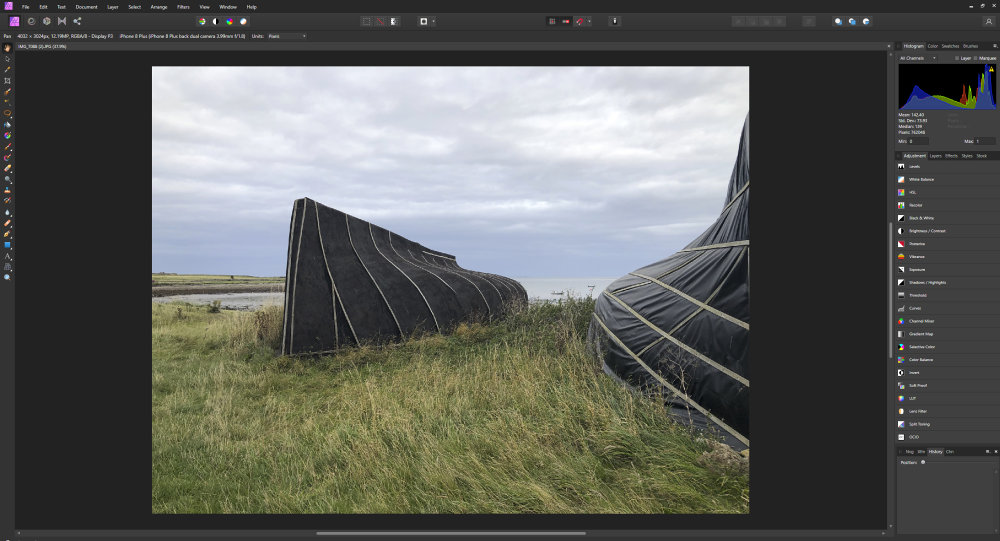 Affinity Photo is split into what Serif call 'Personas' which are workspaces that contain tools specific to the function of the Persona you have open. They help simplify the interface so you're not distracted by tools you don't need and even though they're a bit different to what you find in Photoshop, those who have used Corel PaintShop pro in the past will be more familiar with this way of working.
The Personas include:
Affinity Photo has an easy-to-use interface with those familiar with other editing software, probably, only needing a few minutes to get used to how it works. Down the left, you'll find a vertical list of tools all of which will probably be recognisable and on the right is a system of palettes that can be moved, closed, expanded/collapsed and include Layers, Adjustments, Styles, etc. The options across the top change depending on which tool you have selected as here's where you make adjustments for controlling the tool. Top-left is where you toggle the Personas and above these are the menus you use to navigate the software.
One of the biggest improvements the latest updates have brought is with speed/performance and even though we had no issues with the software's performance previously, it does feel much more fluid and quick in response. In fact, we stacked several complicated layers and experienced no lag or jittering.  It's also very intuitive and easy to learn which speeds up the photo editing process. 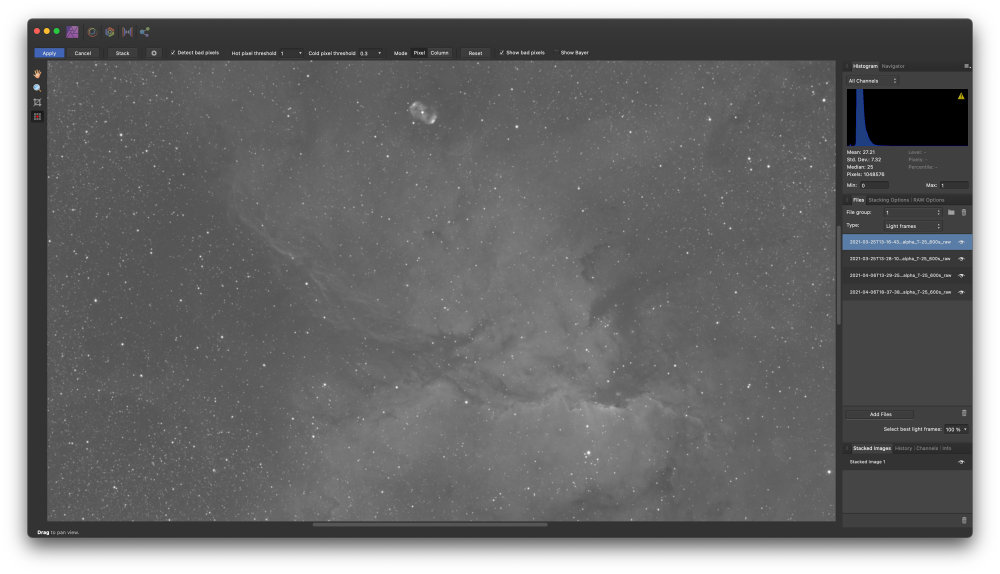 The addition of the Astrophotography stack function is brilliant, even more so considering the price of Affinity Photo, as it's not commonly found in image editors so it's a bit of a bonus that will also save you quite a bit of cash if you're an astrophotography fan. We also see improvements in terms of more tool adjustments now been live (liquify tool) so you can see what's happening in real-time and layers are now maskable which gives Affinity Photo another tool from Photoshop's remit it can go head-to-head with.
We go into greater depth about the tools on offer in Affinity Photo over in our original review so do take a look at that if you're looking for specific viewpoints on options such as RAW editing and Selection tools. We will, however, praise Affinity Photo's non-destructive editing and ability to keep a history of what edits you have made as not all software still offers this, particularly at such a low price, and it really is an essential tool that makes life so much easier. Live-edits are also a big help as you're not messing around going in and out of pop-up windows and you can instantly see how a change affects your photo. 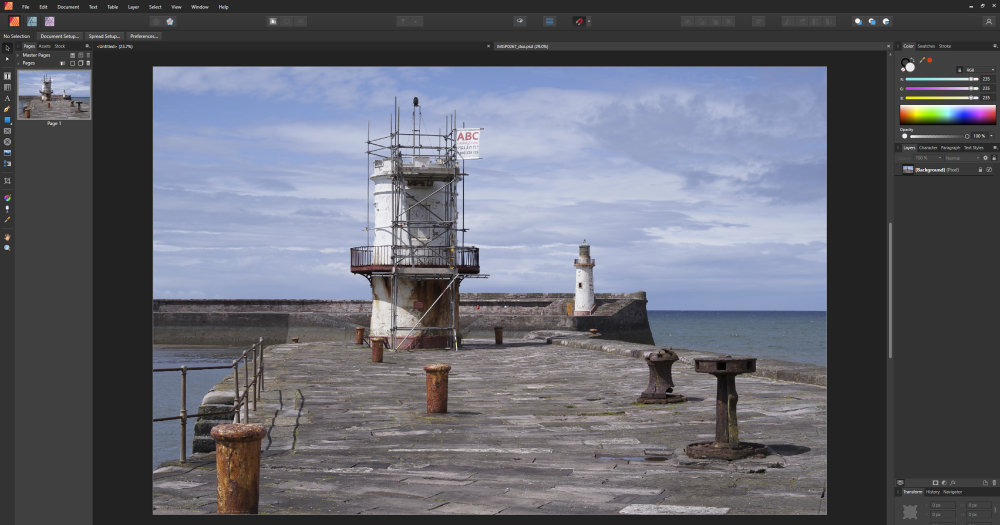 Another useful feature of Affinity software is StudioLink which allows users to switch between Affinity Photo, Publisher and Designer without having to close down one app and open another. So, if you have Affinity Publisher open, creating a photo book of your work, and you think an image could actually do with editing, you can click the 'Photo' Persona button at the top of the window and the tools you can use in Affinity Photo can now be accessed via Publisher. It's a great time-saving feature that works seamlessly.
Something that's still not built-in is a file management system which would make the whole 'edit to export' process even more seamless but it doesn't take away from the usefulness of the software.
We have to, of course, also comment on the fact that Affinity Photo isn't subscription-based so you get updates, as well as bug fixes, without the need to pay a monthly fee which some photographers will prefer.

Affinity Photo (Windows and Mac version) is priced at £47.99 and there's also a free trial available so you can 'try before you buy'. At £47.99, Affinity Photo offers incredibly good value for money and is considerably cheaper than the alternatives available. In comparison, the Adobe Photography Plan which features Photoshop and Lightroom is priced at £9.98 a month which, when compared to the price of Affinity Photo is considerably more and it's on a rolling payment, too.
Adobe Photoshop Elements can still be accessed without a Creative Cloud membership for around £70 however, Affinity Photo is actually comparable to Adobe Photoshop so it has much more features than Elements has to offer, plus it's still £30 cheaper too.
Other alternatives include Corel PaintShop Pro 2022 which retails for £69.99 while DxO PhotoLab 4 is priced at either £89.99 or £133.99 depending on the edition you purchase.

For a long time, Adobe Photoshop has been the go-to photo editing product for photographers but Serif has worked hard to make Affinity Photo a product photographers should be reaching for and we have to say, they've done a brilliant job at convincing us.
Of course, the low-cost perpetual license is a massive plus point, making Affinity Photo an inexpensive option when compared to the subscription plan Adobe offers.
Affinity Photo offers a lot of features and advanced tools, including RAW editing and a non-destructive workflow, for a really great price. Plus, the software offers far more options and controls than many of the free software options available and it also gives you a lot more to work with than Elements (Adobe's entry-level photo editing software) does and at a much better price.
For those who create photo books, Affinity Photo seamlessly connects with Affinity Publisher, too, so you can move files with ease and create your presentation books in no time.
Yes, it would be nice to see a file management system but we're being picky! There are also some quirks and a few features that you'll have to get used to when switching from an alternative photo editing programme but this is true for most software switches.
Affinity Photo has been billed as a Photoshop alternative for some time now and this statement is still true today. In fact, Serif has worked hard to make Affinity Photo the go-to software for many photographers. Plus, there's a free trial of Affinity Photo available so it's well worth giving it a go.

Affinity Photo doesn't just rival other professional and enthusiast-level photo editing software, it easily beats them. Highly Recommended.
Own this product? Let us know what you think of it in the EQDB.

View Full Product Details
Spotted a mistake? Let us know in the EQDB.
Support this site by making a Donation, purchasing Plus Membership, or shopping with one of our affiliates: Amazon UK, Amazon US, Amazon CA, ebay UK,
You must be a member to leave a comment.
ePHOTOzine, the web’s friendliest photography community.
Join For Free
Upload photos, chat with photographers, win prizes and much more.
Get the latest photography news straight to your inbox by signing up to our newsletter.
Visit our Competitions Forum, where you’ll find our monthly competition and other external competitions to enter.
Search for all the latest photography gear and services in our dedicated photography directories.
Calibrate your monitor so you can see 16 different shades :
Magezine Publishing | Top