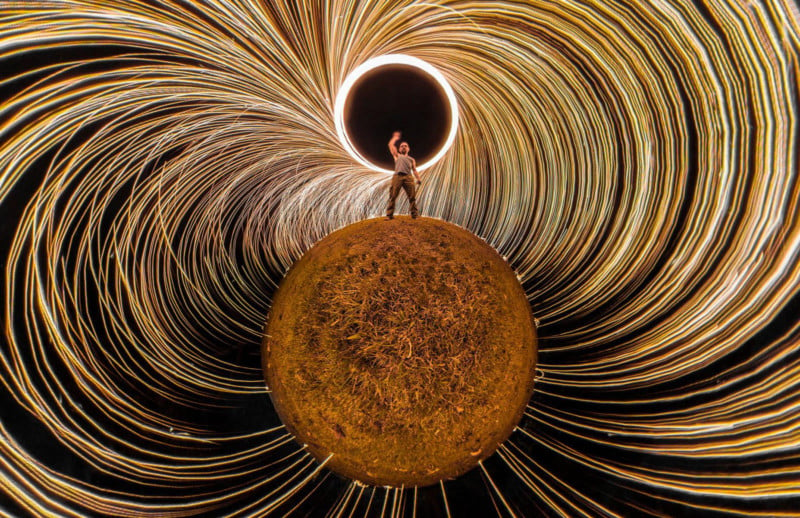 Australian photographer Rod Evans took his 360-degree camera out at night this past weekend and created this mind-bending “little planet” photo of himself spinning burning steel wool above his head.

“I’m new to the whole world of 360 imagery but I am quite experienced with spinning steel wool, so on Saturday night I thought I’d try and combine the two,” Evans tells PetaPixel. “I’m not the first to try it I must admit, I have seen some other 360 photographers spin steel wool, with great results, but I don’t think I’ve seen an image quite like mine, as of yet.”
Evans was shooting with his Insta360 ONE, a $299 360-degree camera that provides manual controls and RAW capture.
“I took the camera (mounted on a small tripod) and placed it on the ground about 2 meters [~6.5 feet] in front of me,” Evans says. “I set the camera to a 15-second countdown timer which allowed me time to find my position and have the steel wool burning and spinning by the time the camera shutter opened. I spun the wool continuously with the sparks shooting out and over the top of the camera until it all burnt out. The camera stopped after a 20-second exposure.”
Evans then loaded the RAW photo up into the software that comes with his camera (Insta360 Studio) and turned the image into the “tiny planet” (stereographic projection) photo seen above.
“The camera is cheap and in my opinion does not capture colors well in low light, as my steel wool shot had some unappealing greens and pinks running through the image, which I did my best to remove in post,” Evans says. “I basically desaturated most colors throughout the image except for orange and yellow, which is quite evident in the brown grass. The tripod was visible right in the middle of the tiny planet so I removed that in Photoshop.”
You can find more of Evans’ work on his Instagram, Facebook, and Redbubble.
P.S. “I should highlight the dangers of spinning steel wool, especially in hot dry conditions,” Evans says. “It is a huge fire hazard so the utmost care needs to be taken.”
There have been numerous cases of steel wool photographers destroying everything from their camera equipment to historic landmarks.
Update on 8/16/18: @gulfu.photography also shot a steel wool photo with a Insta360 ONE camera back in May: