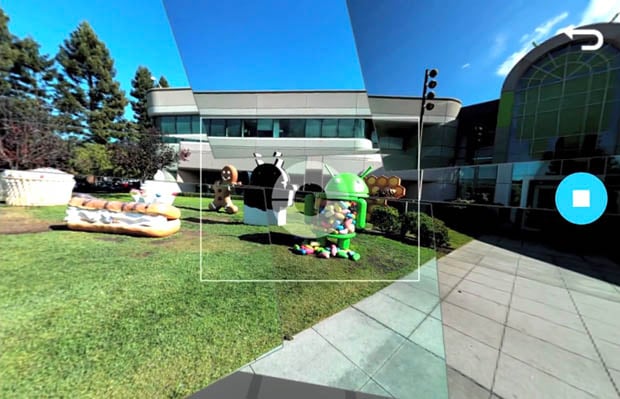 Apple may have launched a neat panorama feature with iOS 6, but Google is one-upping the Cupertino-based company today with its new Jelly Bean flavor: Android 4.2. The OS now comes with an official 360-degree panorama app called Photo Sphere.

Like existing 360-degree camera apps on the market — notable ones include 360 Panorama and Microsoft’s Photosynth — Photo Sphere lets you shoot immersive Street View-style photos using your phone or tablet.
It’s extremely simply: start up the capturing process, and then fill in the blank “canvas” all around you by sweeping your camera across the entire scene in every direction. Here’s a quick demo of how the app works:

Resulting Photo Spheres are stored as ordinary JPEG photographs, with all the 3D information baked into the XML metadata. This makes sharing and viewing a breeze, since you can pass around the Spheres as you would any ol’ photo, and view them flat if you don’t have a special viewing program handy.
What’s neat is that the photographs can be submitted to Google Maps, and will be just as easy to view online as Street View. Check out the photograph above displayed in Google+. There doesn’t appear to be options for embedding these immersive panoramas, but we’re guessing Google will be adding that feature shortly.
(via Android via Engadget)
© 2022 PetaPixel